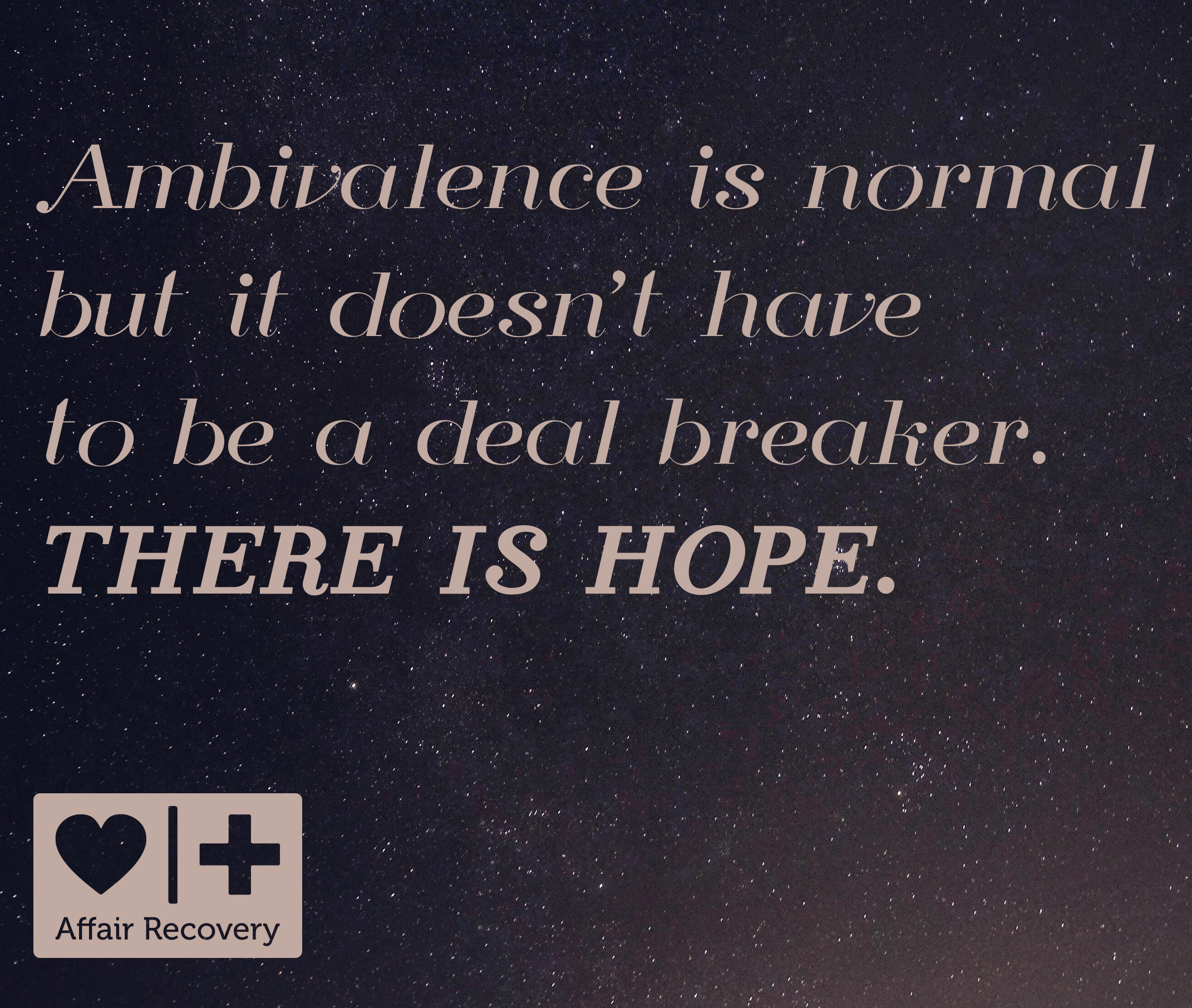 Last May was our three-year anniversary post D-day and as I anticipated, it hardly caused a ripple in my emotions. I knew the day was nearing but we were in a good place and we breezed through it without drama, triggers, or setbacks to our recovery. I believed we were finally through the worst that my husband's betrayal could throw at us. We had made it through the fire and while scarred were at last in a better, stronger, safer place.

Then from out of nowhere and without warning, ambivalence hit me like a punch to the gut. It came as a shock this far into recovery. Ambivalence is normal and part of the healing process and I had a lot of it in the months before we took EMS Online. But I thought ambivalence only happened in the early stages of recovery. How could it strike me more than three years later?

Ambivalence is the state of having mixed or contradictory feelings about something or someone. You're of two minds wanting to go in opposite directions. It strikes both the betrayed and unfaithful. Samuel has an excellent article titled "Ambivalence". In it he states,"In many ways, ambivalence can be a cancer which eats away at both sides of the marriage. It's been said the opposite of love is not hate, but indifference, or in this case ambivalence."

I was suddenly afflicted with the cancer of ambivalence and it was eating at the fragile stability of my trust, gnawing at my emotional well-being and chewing at the hard fought victories I had made in recovery. I didn't care if I stayed in the marriage or not. I wasn't happy. I wasn't sad. I wasn't angry. I wasn't good humored. If my husband wanted to go out to eat I didn't care one way or the other. Movie? He can choose. Sex? Whatever. I was blah, going through the motions of my day without emotion or care. I was withdrawn, only talking to my husband when necessary. I knew I should do something but couldn't figure out what and couldn't muster the energy to care enough to start.

And what made it worse was that my husband totally ignored that something was going on. He wasn't oblivious. He couldn't be. He just chose not to reach out to me. It was painful.

One day, several weeks into my malaise I called my mother and begged her for help. She asked me if I wanted a divorce. The answer was no. Then she told me what I already knew I had to do. I had to talk to my husband. He admitted that he knew something was wrong but didn't know how to talk to me about it. I told him that I needed his help to get through my ambivalence. I was specific in my requests. I needed him to reach out to me with more hugs, touching, and affection without it leading to sex. I required him to reassure me that he's thinking about me and needing me throughout the day with texts. I needed him to reach out to me when I'm withdrawn and keeping to myself.

He tried but it only lasted a few days and my ambivalence raged on, engulfing my every waking moment and overwhelming me with its intensity. I quit reading everything related to Affair Recovery thinking that being exposed to the pain of others was adding to my problems. I tried forcing myself to be intentional in my actions towards my husband which had always worked in the past. I did a lot of self-reflection attempting to figure out where the ambivalence was coming from.

I gradually began to connect with a separate incident that was happening at the same time with my ambivalence and the pieces finally came together. My husband had told me early on during recovery that one of his reasons for betrayal was that he felt a lack of intimacy in our marriage. That lack of intimacy was directly related to the fact that years ago when he gained weight it caused him to snore. He started occasionally sleeping in the spare room which eventually led to sleeping there every night. Over the years our intimacy suffered and so did our relationship. After D-day, we started sleeping together again and I bought earplugs to help me cope with the snoring. He eventually lost enough weight that the snoring rarely became a problem.

But now he had gained the weight back and suddenly he's sleeping in the guest room, just like before. This is a huge trigger for me. The longer he sleeps in the guest room, the more worried I get about losing intimacy and the negative repercussion this could have for our relationship. I have mentioned my fears to my husband several times but he doesn't seem to care. If he's not concerned about our relationship, why should I be bothered?

After working this out in my mind I talked to my husband again this time explaining that I believed my ambivalence may in part be coming from the fact that we're not sleeping together again. I got nowhere.

I wish I could say that my husband stepped up and fulfilled my needs helping my ambivalence disappear quickly. Unfortunately, that's not the case. Was I asking too much of him? Possibly. Unrealistic and unmet expectations can be another cancer that eats at a marriage. But what I will tell you is that he hasn't used these past months as an excuse to be angry or frustrated or hateful to me. He's given me the space that I need to work through my emotions. And while he's not been supportive in the way that I had hoped he has been solidly supportive by always being there without judgment.

We aren't sleeping together yet but he has finally decided to lose weight. There's progress. Not as fast as I would have liked but progress. The ambivalence has been slowly seeping away like fog as the brilliance of the sun burns it off. There are still wispy tendrils left, sneaking around in low spots, trying to wrap around and hide in dark corners of my heart. But the sun is doing its work one day at a time and I can finally see the horizon.

I've learned that just because we're years down the road since D-day, that doesn't mean my or our recovery is perfect. We had become somewhat complacent but have discovered that it's important to be prepared for anything as we navigate the quagmire of recovery. If I hadn't been committed to my goal of a better, more honest, more respectful marriage I may have given up. If my husband had allowed my ambivalence to cause him to be impatient or frustrated with me he may have given up. It would have been easy for him to say it's been three years, get over it! Luckily he didn't.

I recommend reading Rick's superb articles, "The Paralysis of Ambivalence: Part 1" and "Part 2". Ambivalence is normal but it doesn't have to be a deal breaker. There is hope.

Thank you for this article. Your words expressed what I am feeling at this time and I was wondering why after 10 months I’m still having these feelings and not knowing what to do with them. It is so comforting to know that your not alone.

I so needed this today.

I so needed this today. Thank you for sharing your story. This is something I struggle with and keep asking myself when should I be over it? Shouldn't I be past it by now? Is this normal? This insight into someone else's story gives me hope.

I so enjoy the information that you share. I look for your post. Thank you for taking your time to post. Our time lines are very close. I really thought by this time out from D-day things would be so different. Crazy thing is I don't know what sort of different I wanted. My husband will say we have a wonderful marriage. But I just am not sure I will ever feel that way. Yes we have a more honest marriage. We have better communication. Household things are split more evenly. But these were all the things I strived for years. The marriage classes I asked to do years ago he has finally agreed to do and now says if I would have only know this sooner. He still tries to justify the end by the means, and here we are 3 years later and I feel exactly as you described just blhhhhaaaa. Most days if I could find a cave w/ wi-fi and cell service I would move there. Some of it is the time of the year, for me that is hunting season (when his affair took place and the excuse he used) and the holidays, some of it may be depression, but I am pretty sure that the lions share of it is just ambivalence.

Thank you for your vulnerability about your 3-year D-day experience. I just passed 2 years, but we haven't had full disclosure yet. Mostly because I am afraid he will not be emotionally available for me when I experience triggers/ambivalence. With regularity, he will react badly when I talk about triggers or relationship issues. This leads to more triggers and trauma because it reflects what happened when he used porn for many years without me knowing. I am reaching out to trusted others for support because I know we MUST get through the full disclosure, and yet, I MUST have support. Nothing on earth is perfect or easy, and even when I struggle, I know that God is making me more like Him. Thank you again.

Untransformed Pain will be Transmitted
I Still Struggle
How to Change, Part Three
Achieving Real Change, part 4
How do you respond to blackmail?