The Paralysis of Ambivalence: A Two Part Series

>Part 1: A Normal Part of the Process?
Part 2: To What Are You Willing to Commit To?

Within the office walls of therapists who treat infidelity you'll find endless conversations about ambivalence. The wayward spouse will tell their mate they love them, but they're not in love with them. They know what they ought to do, but they really want to be with the other person. They can't seem to make up their mind. Ambivalence can also rock the world of the betrayed spouse, when their mate agrees to give the marriage a chance only to later be told that they have absolutely zero desire to work on saving this god forsaken marriage.

Ambivalence: a normal part of the process?

After 40 plus years of treating infidelity and addiction, I've come to realize ambivalence is simply part of the grueling process of recovery. It is the stage where we consciously or subconsciously choose to keep our options open by not committing to change.

"Most people who need to make a change are ambivalent about doing so. They see both reasons to change and reasons not to. They want to change and they don't want to, all at the same time. It is a normal human experience. In fact, it is an ordinary part of the change process, a step along the way."1 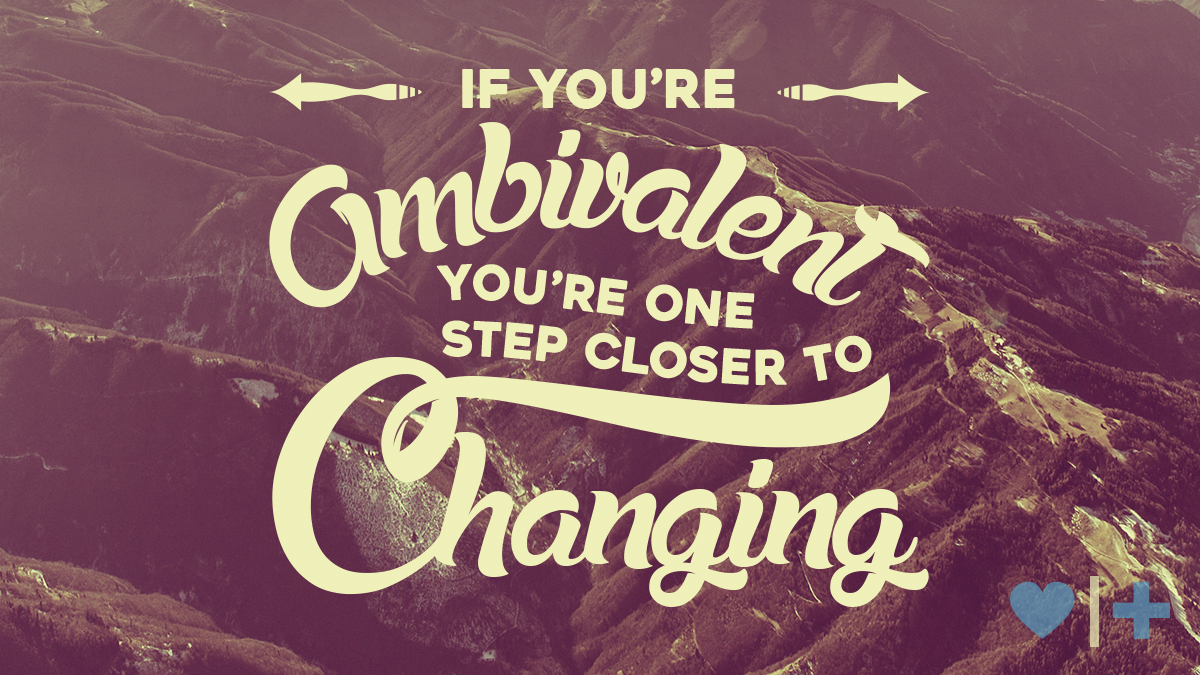 If you're ambivalent, you're one step closer to changing.

Sadly, both the betrayed spouse and the wayward spouse mistakenly view their mate's ambivalence as evidence of the futility of considering any form of reconciliation when in reality, it's a normal part of the change process. It's easy to spot the ambivalence in one's mate, but how good are we at spotting it in ourselves? Once betrayed, it's a common reaction for someone to push their mate away in anger each time there is an intimate moment with their mate or when a trigger reminds them of what happened. Having given into the part of them that wants to be with their spouse, another part of them jumps up, slaps them on the inside, and says, "oh no we're not going there again!" Later, that rage may give way to a desire for connection and once again they move toward their mate only to find, once they get too close, anger or fear intervene once again, pushing their mate away. It's also common for the wayward spouse to feel ambivalence about the marriage if they are too focused on their mate's ambivalence and not focused enough on themselves. They see their own efforts to regain their mate's trust, but are blind to the increase of their own ambivalence about the relationship each time their mate rebuffs them.

While ambivalence is gut wrenching, it is NOT proof the marriage is over or that there is no hope.

As counterintuitive as it may seem, it's a natural part of the recovery process and a byproduct of the flurry of differing voices going off in one's head every day.

What Language Are They Speaking?

What I listen for, above all voices, is a shift to the language of commitment. Are they committed to doing something? The language of ambivalence says things such as, "I know I need to make my marriage work." But needing to do something such as forgive or make my marriage work has nothing to do with being committed to doing that. I may really want to stop being verbally abusive, and while admirable at face value, it shows a desire, but not commitment. I myself want to lose weight and to exercise and I will even tell you I'm going to TRY to lose weight, but what are the odds that I'll really lose weight if it's something I'm going to try to do?

"Try," "need" and "want" are all words that fall short of the language of commitment.

Imagine Stephanie and I doing a renewal of vows and I say:


"Stephanie, I am going to try to love you, I really want to comfort you, I'm going to try to honor and keep you for better or worse, for richer or poorer, in sickness and health, and I really intend to forsake all others, and will try to be faithful only to you, for as long as we both shall live."

The language of commitment is, I guarantee (commit) I'm going to do this. I promise I'm going to do the EMS Weekend, for example. I have to go see a therapist to deal with my trauma. While you may not know whether you want to stay married, it's more than possible to commit to a process of change to determine if there's anything worth salvaging. With a commitment to change and personal transformation, the stage of ambivalence is abandoned and a new course is set towards what you are willing to commit to.


I've included two helpful videos for you below to provide further insight into the topic of ambivalence. Are you ready to start using the language of commitment? Consider signing up for EMS Online, our course for couples, at 12:00 PM CST today.

I understand. After all this

I understand. After all this time, I need to see he wants this as much, if not more than me.

This article helped me. I was

This article helped me. I was the betrayed. And I am ambivalent about the marriage. I'm so thankful the article could speak to my mindset. But the article helped me see that I can be committed to change, change for myself, change expected in the relationship. And that will see me through this ambivalence season one way or another. Thanks Rick.

what if im the unfaithful and the betrayed?

I had an affair in 2015. I finally confessed feb. of this year. 1 week later my husband confessed that he cheated 3 times during 2014 into 2015. We have been together since 2010 we married May 16th 2015. I cheated after marriage and he cheated before. I'm confused on how I should feel. He thinks what he did doesn't matter because it was prior to marriage. how is that? Should I be angry Do my feelings about what he did still matter?

Setting boundaries during this time

It's been 54 days since I found out. I am the betrayed. My husband is ambivalent. He says he loves me, but he keeps running to her. I finally asked him to move out until he was committed to making the marriage work. I'm not sure what all that should look like. Do I have him over to see the kids or ask him to take them elsewhere? (I had him over last night and I'm a mess today). Do I let him come and go for showers and clothes (he is living in his shop)? I don't want to nitpick and be bitter and vengeful, but I don't know how to set the boundaries that are helpful to both of us and keeps him in the lives of his children. Thoughts?

Hey I’m in the same boat....can I ask you how has it all turned out for you ?

This explains my husband well. He had/is having an emotional affair with another married woman and he can't decide what he wants. Do he run off into fantasy land with her (even though she is still married) or stay with me and tried to make the marriage better than before? The only problem is, he still has daily contact with her and won't give it up. She is his escape from the stress of work and raising children. He spends hours and hours of messaging, texting, calling and video chatting with her.

His behavior drives me crazy! I want to hit him on the side of the head and knock some sense to him so he can see how obsessed he is with her! I'm
standing for our marriage. I believe our vows before God are very important and should not be broken. He can't decide since he feels that maybe God brought her into his life for a reason.

The waiting is very difficult. I went to be over with the betrayal and look forward to their relationship ending and all contact ceasing. Will it ever happen? As far as he thinks they are just really good friends. He doesn't get the fact that you can remain friends with your affair partner. The fog needs to be lifted!

I can't do anything to change him. He even said he doesn't want my help, which honestly, I can't help anyhow. He needs to come out of this on his own.

So I wait. I'm working on making myself better, which he has mentioned how I have changed! He also sees it a me competing with the OW. No!

I wondering whether to stay or go at this point. Wife had 2 affairs before we separated (this is the 2nd time we separated). While we were separated and in the divorce process, we both had other sexual partners as we both thought we wanted the divorce right up until the end. Recently we both agreed to work on the marriage but she has shown absolutely no emotion with regard to her affair or what I went through. Could really use some help here. I have been watching some of the video blogs on youtube that have helped a little, but my problem is she gave a half hearted apology and has this "I dont care" attitude towards life. Its not just that she wont open up, she said she closed herself off. My guess is that it was easier to that than deal with the guilt or shame of her affair.

Excellent videos today. I am the betrayer and I think you are right on!

Social Shame: Four Ways to Stay In It
Discovery: Processing the Details of the Affair
Discovery: Why do I Want to Know?
The Paralysis of Ambivalence: Part 2
How Does the Betrayed Spouse Grieve Properly?