Harboring Hope is our online course for betrayed spouses to heal after infidelity. It often sells out within a few short hours. Don't miss it!

I'm not one of those guys who has it all together, but I'm sure you can relate. Sometimes, it feels like there's no way to survive the pain being generated by circumstances in our life. Betrayal is a pain like no other, but there are many other painful situations that can knock the stuffing out of you too.

When I was a young boy, my dad was the strongest man around. He taught me about being a man. He took me fishing, hunting, camping, and tried, as best he knew how, to teach me how to live life. He was not perfect (he would be the first to tell you), but I suspect he did far better than I could have done with the same limitations. Dad was only six months old when his mother placed him too close to the fireplace, which ignited the blankets and tragically burned off his feet. As sharecroppers in the '20s and '30s, there were few resources and times were tough. The Shriner's Hospital in Dallas, Texas, helped by providing much needed surgery when Dad was five years old. How many of you can imagine placing a five-year-old boy on a train, alone, from central Texas to Dallas? Dad spent six weeks, separated from family, in a hospital burn ward where they cut the scar tissue so they could separate what was left of his feet from his shins. The result wasn't pretty, but at least his stubs were down to a 90-degree angle!

In his family, it was never an option for Dad to be crippled, so they put cotton in his shoes as homemade orthotics and told him to get along. All throughout his life, very few people knew my dad didn't have feet. He learned how to walk and adapt so others would never suspect his major limitations. He hid his pain by hiding his shame, making sure he always wore long pants, shoes, and socks so others wouldn't know. For Dad, the goal was to never show weakness. To do that, it became necessary to succeed. He believed that anything worth doing was worth doing perfectly. Dad lived in constant fear of being discovered as a "fake." 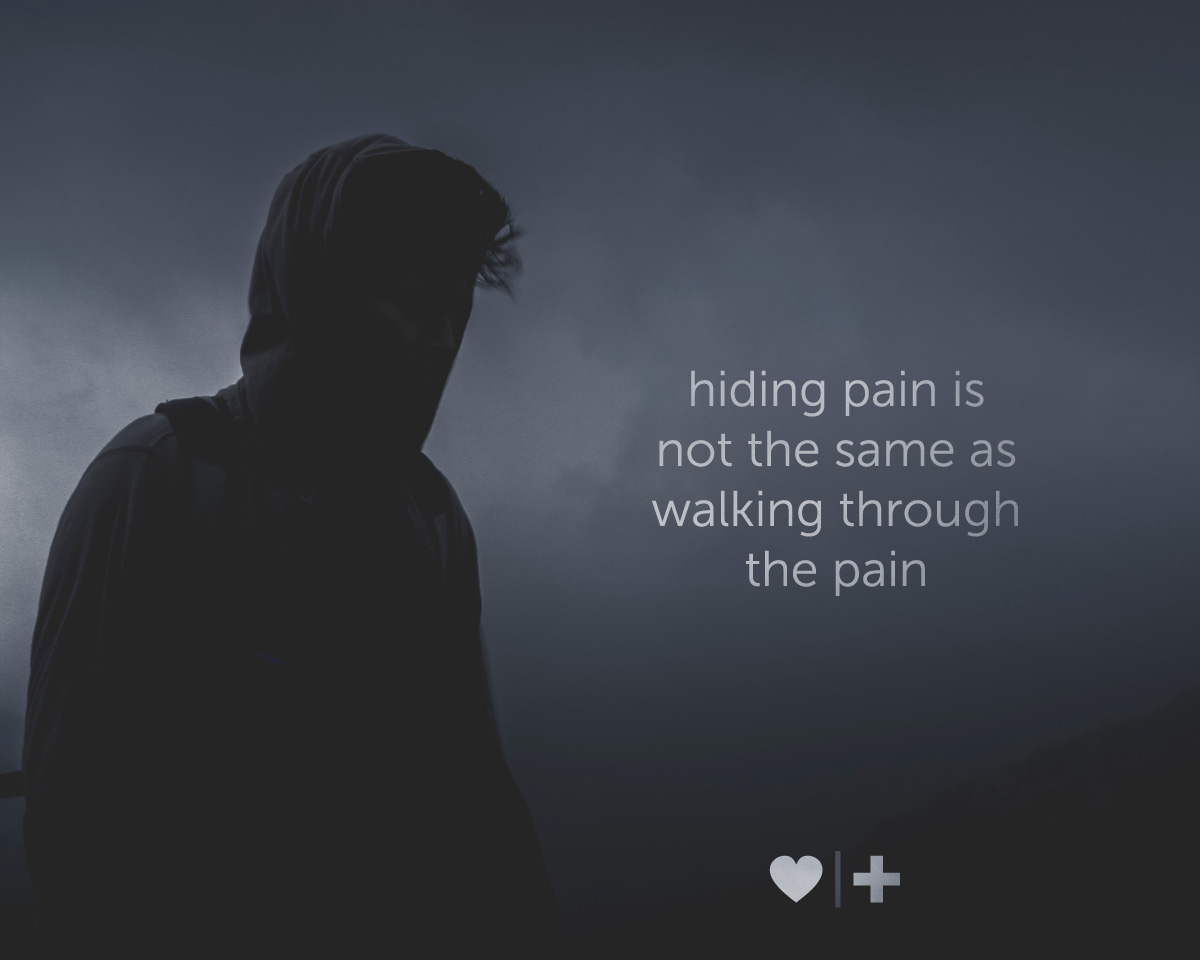 Hiding pain is not the same as walking through the pain. If our pain isn't addressed, it is transformed into shame and we'll spend the rest of our lives in denial, afraid that others will discover the truth. We mistakenly believe that hiding the reality of our situation will somehow save us from the pain, yet doing so only serves to enslave us to that very same pain. Hidden pain is then transformed into shame. Our shame then negatively impacts all those we love and serves as the fuel to perpetuate our cycle.

I firmly believe that pain that is not transformed will be transmitted. My dad was a tremendous man, but fear and shame ruled his life. Few men have loved their children more deeply than my dad did, but all his love couldn't negate the pain and negative messages he transmitted to his sons. If you teach your kids to never show weakness, then you automatically imply there's a weakness to hide. While Dad was teaching us the messages he lived by to survive, even though he meant well, he inadvertently transmitted his pain and shame to us, his sons who he sought to protect.

The problem with pain is it can't be ignored. You may be thinking that you can ignore the wounds perpetrated by others or those created by your own poor choices, but that's not true. The pain still has an impact. The only question is, do we have the courage to walk through the pain and deal with its impact in an honest way?

The solution doesn't lie in pretending the situation never occurred, rather it's the ability to accept what happened and then walk through whatever is necessary to address it.

It takes a great deal of courage to face life on life's terms, but it's the only path to maturity and growth. For my dad's sake, I wish he had been able to face his handicaps rather than feeling he had to hide them. I honestly believe I would have been even more proud of Dad if his story had been that of a man who was flawed and yet, by the grace of God, lived beyond his capabilities. (I was still incredibly proud of him. I just wish Dad didn't feel he had to hide his disabilities.)

You may be wondering what this has to do with infidelity. The answer is...

How you decide to respond to your pain will greatly influence your future and the future of your children.

You're either going to live in "pretend normal," denying the reality of your situation and your pain and inadvertently transmitting it to the next generation, or you're going to face it and move through it, allowing it to become a part of who you are.

If you choose to deal with infidelity, rather than hiding or avoiding it, you allow it to become a part of your life's story. I can virtually promise it will set you free and send you toward the life you've always wanted. Failure to do so will result in passing on your unfinished business (and hurts) to those you love—something none of us want to do.

Harboring Hope is our online course for betrayed spouses to heal after infidelity. It often sells out within a few short hours. Don't miss it!

does this mean you tell

does this mean you tell family and friends?

How True indeed and those who get the passed on remnants pay the price ten times over. My husband's mother did not deal with her grief over losing her husband suddenly with a 3 and 5 year old. She treated the kids like they were her now burden to deal with instead of the precious gift her husband left her with - his life could go on.

How did it affect her children - my husband grew up angry at the world, because she was angry for being left a widow. How did it affect his family - I was treated the same way his mother treated them, they were loved, but a burden. Problems and a persons flaws were weakness that were hidden and compartmentalized - instead of worked on and embraced.

My husband had an affair to escape whatever frustrations in life he didn't want to deal with. It was easier to have a fantasy world than to fix the broken marriage and family his anger and resentment created.

We are still here because of ARC and I am stubborn as all get out and saw the good in him years ago and refused to give up on him, our family or what could be.

Thank you Rick Reynolds for sharing your heart with those of us hurting and dealing with the hard aftermath of betrayal.

And thank you! Because I have a kindred soul in seeing the light! 44 years together.

Rick, without a doubt this is the best article I've read so far.  You have used a REAL LIFE experience to explain the path one MUST take to see true healing in their marriage---both the unfaithful and the one who was hurt.  Thank you so much for your ministry and for being COURAGEOUS enough to be transparent to show your scars, so we have a chance at restoration.

Thank you for your

We are in chapter 28 of our marriage story. But we must go back to chapter one of my husbands life story.......what happened to him as a young boy.
His pain, projected forward throughout his entire life, and now into mine, into ours.
This makes some sense of the nonsense.....thank you for an enlightening article.

Who do you tell?

Rick, do you recommend that betrayed spouses tell their children? And if they don't is that hiding their pain?

I opted to not tell our 13-year-old son but I don't know if that was the best decision. In other posts it has been suggested be careful who you tell in the beginning as you might regret that later.

an article for you....on telling the kids

hi there. you may find this article helpful for you about telling the kids: https://www.affairrecovery.com/newsletter/founder/2011-07-27-children-infidelity-part-2

I have dealt with the pain caused by my husband or should I say am dealing with the pain and working to resolve it. But how do I deal with the pain and rejection cause by others (family members and friends) because of the fall out of my husbands affair? I just keep finding myself hurt and angry with some of them. My natural instinct is to cut all ties and be done. That is how I have dealt with things most of my life. But I am learning that was not "dealing" with things. However with some family members (in laws) the dysfunction is so great that things are not allowed to be talked about or processed. Every time I think that things are getting better emotionally with me I have to face a family situation and find my emotions as raw and hurt as ever. ANY SUGGESTIONS????

We are coming up on the two year anniversary of the implosion of our marriage. The cracks were there for years but I didn't know how dysfunctional our relationship had become. Because we both committed to transform our pain instead of transfer it (by the grace of God working in 2 individual hearts) we have been reconciled to one another. I share this to give hope to those who are just starting this journey through AR. I believe God saved our marriage but the EMS weekend set us on the path to recovery by educating us and setting us straight on exactly what the purpose of marriage is and why we are better together than apart. However...it took BOTH of us getting to that realization, so if your spouse is not on the same page at this point...PRAY hard and trust that God can work a miracle even when it looks like the pieces are broken to bits and beyond repair. God will give you all new building material and a solid foundation that will provide you the stability and security everyone craves. It will take months or it can take years, but I'm living proof that it can happen.

Why is the onus on the betrayed?

As someone who is still recovering from my spouse's betrayal, I resent articles and advice that tell me that I need to move on, which is what this article does. Three years later, I still have PTSD triggers and feel that my husband will never rebuild my trust, so yeah, I'm walking through the pain. I think it would be much more therapeutic for you tell tell the betrayed that this is a terrible thing, you didn't deserve it, it's up to the unfaithful to make it right, and then you can choose to walk through the pain or not.

obsession with my husbands affairs

am so obsessed with my husbands affairs that i cant sleep, how can i overcome that?

Ending an Affair: Lock the Door Part 1
Pimping Tenderness & Grooming Behaviors
The Trap
Betrayal Trauma: How We Get Stuck in Trauma Bonds
Intrusive Thoughts After the Affair: How to Manage Flooding