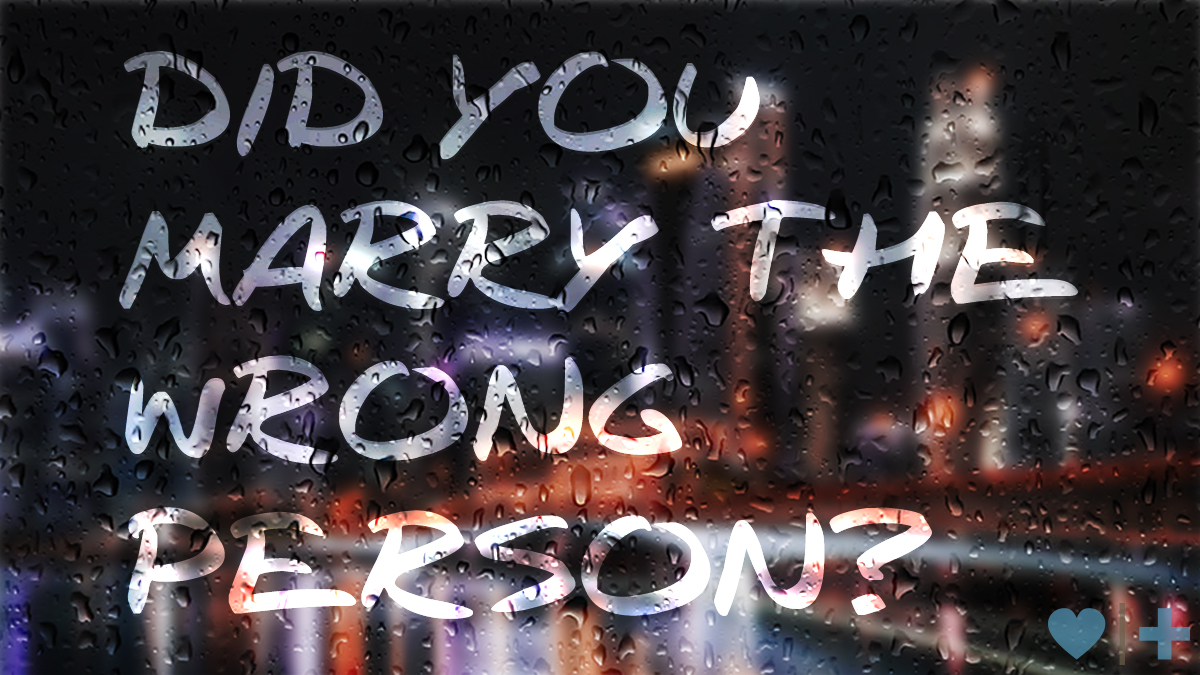 Did you marry the wrong person? A whopping 30% of divorced women believe they did, at least according to Jennifer Gauvain.(1) How can so many people be getting it wrong? Was the other party so deceptive that they were fooled into believing something false? Or perhaps they failed to listen to their own intuition and chose to marry anyway only to discover they just made the most grievous mistake of their life? Perhaps it isn't about who you married but rather your expectations of the marriage. What are our expectations and how do we determine whether or not we made a mistake?

Years ago, a friend told me, "To keep from getting in trouble with your landlord use straight pins to hang your pictures. That way, when it's time to move, the holes will not be nearly as noticeable." But when my newly hung pictures began crashing to the floor I learned a valuable lesson: Don't hang your pictures on something unless you're sure it can bear the weight. The same is true of marriage. Is the weight of our expectations for marriage more than it can possibly bear, or does the problem lie with our spouse?

To understand marriage and find answers to these questions, it's helpful to take a historical look at the changing roles of marriage in our culture. In the 1800's, we had institutional marriages, which were necessary for survival. After the industrial revolution, the purpose of marriage began to shift from survival to relational. Thus, we had what sociologist Andrew J. Cherlin refers to as companionship marriage from approximately 1850-1965.(2)

The countercultural movement of the mid-1960's was the birth of the individualistic marriage. Marriage was no longer an absolute; it morphed into one of the several paths one could take for personal fulfillment. The purpose of marriage was now to make me happy. It was about finding a life with another who could "complete you". The individualistic marriage began shifting away from a focus on commitment to one of contentment. If it's not making me happy, then perhaps I'd be better served by something else. It's no wonder that once the weight of self-fulfillment was placed on the back of marriage, the American divorce rate began to soar.

This newer model of marriage creates a natural pathway to wondering if you have made a mistake in choosing your spouse. If the goal of marriage is now personal fulfillment, and I'm miserable, then my marriage is certainly failing to meet my expectations. This quickly leads me to conclude that I've married the wrong person.

I'm old enough to remember when marriage proposals, while significant, were not the grand event they are today. Marriage proposals were once an invitation to partner together in life, and they were typically done privately. In today's world, there's a new expectation that they be a romantic production which communicates the depths of one's love for their future partner. Failure to make the proposal a big deal could be construed as a lack of love for one's potential mate. The proposal now carries new significance and, for some, serves as a measure of how highly the bride is esteemed as well as a predictor of future relational bliss. We begin answering the question of whether this is the right person by their ability to make us feel good about ourselves.

The shift from love-based marriages to happiness-based marriages isn't just displayed in proposals. It's also measured by how much you're willing to sacrifice for my sake to make me happy. This trend can even be seen in television programming. Instead of programs such as "I Love Lucy," reality TV shows such as "Say Yes to the Dress" and "Bridezilla" now capture market share. How much are you willing to sacrifice to make me feel special? Determining whether or not this is the right person is often measured by the significance of the sacrifice you're willing to make for my sake.

It is important to affirm that some people do marry the wrong person. Abusive marriages, marriages where one party has no interest in ever being faithful, or marriages that have been abandoned must consider safety first. There are some whose hearts are hard and who are only willing to show compassion and concern for themselves. Safety is the issue, and continuing in the relationship where your mate isn't safe may be unwise.

I do believe there is benefit and potential in the current view of marriage. The danger is that when an individual places the responsibility of their happiness on another person, failure is almost inevitable. We fail to see that my mate isn't my problem, but my mate reveals the problem in me.

My warped thinking about marriage wasn't challenged until I had to take responsibility for my infidelity. At that moment, I realized I'd been asking the wrong question.

The first question placed an undue burden on both Stephanie and the marriage, while the second placed the responsibility where it belonged. I needed to take personal responsibility for my own life rather than abdicating that responsibility and placing it on someone else. My focus needed to be on becoming the best person I could be, someone I could respect, and someone I'd want to be with. Abandoning the quest for the "right person" and exchanging it for the quest of becoming the right person changed everything.

When self-fulfillment is the goal, you risk placing the responsibility of your happiness on your mate, and it won't be long till things get rocky and the allure of something else will catch your attention and possibly lead to infidelity.

If you suffer from believing your happiness is your spouse's responsibility, it's far more likely that it's your mate who has actually married the wrong person.

Here are a few ways to determine whether your mate married the right person.

Your mate may have married someone who is not being the right person if:


While it's more than possible for marriage to fulfill your needs for happiness and self-fulfillment, it requires ongoing work for both parties individually and as a couple. When that happens it's a gift, not an inalienable right. Therefore, we need to celebrate the moments when it occurs and work at maintaining an attitude of compassion and concern for your mate. Love acts in the best interest of another, and I believe that when love is my focus I'll experience self-fulfillment.

I personally don't believe there is just one right person to marry. Marriage is God's primary people-growing machine. If you think you've married the wrong person because you're not happy, then I'd like to invite you to consider the possibility that perhaps your spouse isn't the difficult one, and perhaps you're more self-centered than you care to believe. If happiness is the goal and marriage is the means then you're not focusing on how to love; you've simply created a performance-based relationship, making it all about how well your partner does at meeting your needs.

It’s easy to know we married the wrong person when one of us loved and dedicated ourself to the other and kept growing in the marriage building a life and family, hoping for a partnership one day, turning toward the other; while the other spent the marriage focusing on themself and their career, hiding secrets, gaslighting, and an affair. It’s pretty simple to know we were lied to out the gate. If someone pretends to be one way while you are dating and then blatantly says they no longer have to try after you are married and starts treating you like you don’t matter much, life becomes fairly evident. Even if you continued trying for a long long time.

Relapse: Why Can't You Stop?
Are You Vulnerable to an Affair? Part II: Marital Vulnerability
Am I Who They Want?
The Anorexic Marriage: A Void of Intimacy
Pleasing Versus Loving