Cover more ground faster with the life-changing experience of EMS Weekend for couples.

This is not your average light and fluffy program that only scratches the surface. Up front, it's important to know that we won't shame the unfaithful spouse nor blame the betrayed spouse. This 3 day intensive is a safe place for both of you to heal.
Now offering $1,000 discount for virtual months during the pandemic. Limited availability.

When Missy came to my office, she was undone. Her husband had been involved in a torrid email relationship with an old girlfriend. She had stumbled upon the emails and had read each of the hundreds of exchanges between her husband and the other woman. If that hadn't been bad enough, she also was horrified by the way her husband had addressed the other woman and the desires he had expressed. The language had been vulgar and unlike anything she had ever known from her husband. She couldn't believe this was the same man she had been married to for over ten years. She was shocked by what he had done. Who was he, and was this what he wanted?

When confronted, he immediately broke off the relationship and explained it had been nothing more than an exercise in fantasy and not anything he seriously wanted. He made it clear that he wanted the marriage. She, on the other hand, wasn't sure she wanted to be with him. The emails had disgusted her, and she couldn't see ever being with someone who would find what he had written about appealing.

Thus began the long journey of trying to come to a common understanding. A perpetual struggle began over what he said he wanted versus what she now believed he wanted after reading his emails. The sticking point came with their inability to feel the same way about what he found to be erotic. In order for her to feel safe, she wanted him to see his desires as disgusting as she did. He admitted that what he had done was horrible, and he was ashamed of himself for betraying her and compromising himself, but he couldn't see how he could change what he had always found tempting.

HOW CAN I GO FORWARD IF THEY DON'T SEE IT THE SAME WAY? 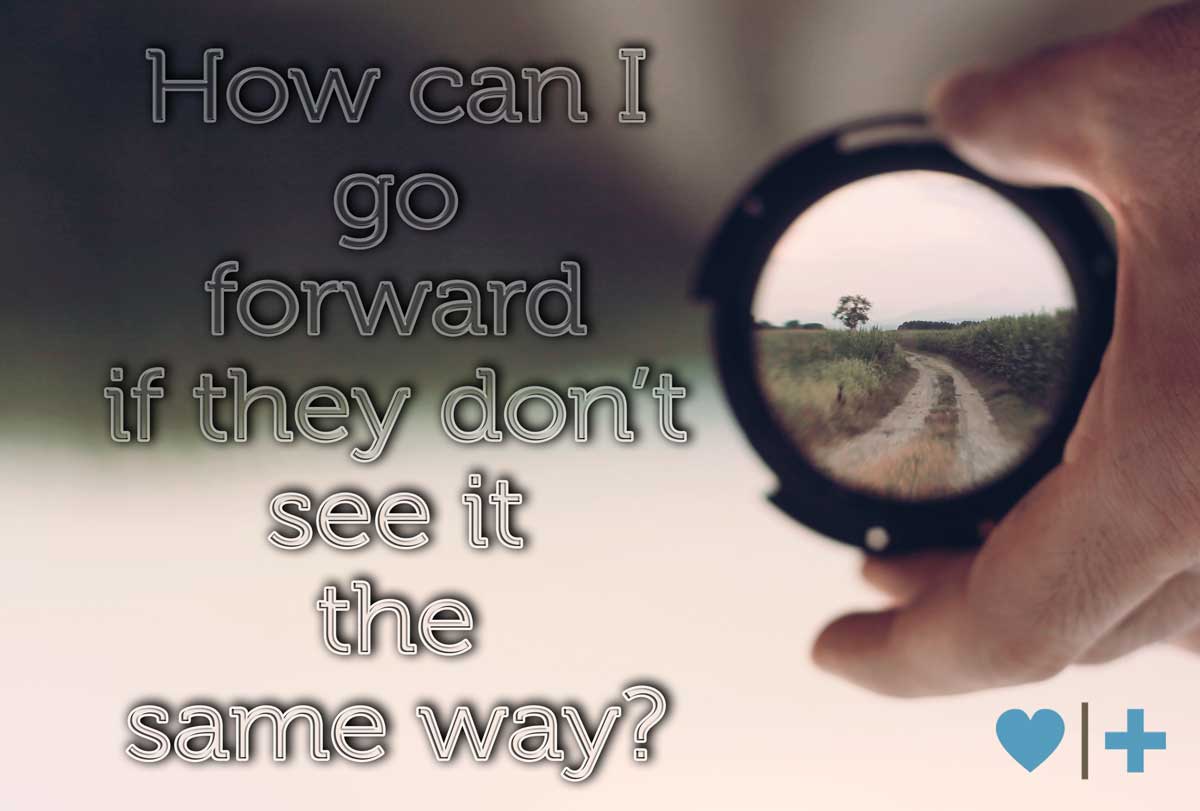 Lately, that question seems to be coming up more and more. Missy and Jack aren't the only ones dealing with that question. What if your mate was involved in a same-sex relationship, and, while it's not what they truly desire, they still find it alluring? What if they find something like being spanked by you highly sexual, but you are disgusted by the fact that they would find that arousing. They may understand how you feel, and you may both agree to the boundaries of your sexual relationship, but you know they still find it appealing.

Why can't they see it the way you see it? What if they break off their affair but don't feel the same hatred for the other person that you do? Can you be with someone who doesn't share your perspective on that other person?

We long for our mate to share our perspective, but is that what we really want or need?

The author of Genesis tells how God placed the "Tree of The Knowledge of Good and Evil" smack dab in the middle of the garden, and then told them not to eat it. Why in the world did he do that? Seems to me that the world might not be in this mess if God hadn't placed temptation in their way.

On the other hand, I'm not sure there was another choice. If he hadn't created something for them to choose over the relationship with him, then he would have been nothing more than a control freak, and we would have been nothing but puppets. Without choice, there can be no loyalty. Without choice, there would be no love. The sacrifice associated with love requires a willingness to sacrifice our desire for the sake of our beloved. The problem is never the temptation; the problem is our response to the temptation.

Temptation Doesn't Define You or Your Mate

Temptation doesn't define us. If it did, then the person with the most temptation would be the vilest person. From my perspective that person would be Jesus, but we certainly don't consider him to be vile. In the first chapter of the book of James,1 for example, it says "Let no one say when he is tempted, 'I am being tempted by God'; for God cannot be tempted by evil, and He Himself does not tempt anyone." Furthermore, in the book of Hebrews 4:152, "For we do not have a high priest who cannot sympathize with our weaknesses, but One who has been tempted in all things as we are, yet without sin." While we may agree with this concept intellectually, I'm not sure how we see life itself as it unfolds around us.

Let's say you were to go to one of your close friends and tell them you'd been tempted all week to have an affair with their mate. Do you think they'd appreciate your honesty and understand that we all face irrational desires, or would they think something must be seriously wrong with you? They might even terminate their relationship with you because you no longer feel safe.

This scenario happens constantly in marriage. The fact that Jack is tempted by something Missy sees as disgusting can present a real problem. (Depending on how you look at it.) It could leave her thinking that something must be desperately wrong with Jack if he could find such a thing appealing, and that she needs to get as far away as possible. Missy could also choose to see Jack's temptation as a part of our fallen nature and appreciate his taking the necessary actions and steps to keep both of them safe.

Acting In Their Best Interest or Our Own?

If we were able to be the same and feel the same about all of life's struggles, then life would be dull indeed. There could never be loyalty, sacrifice, or love. The challenge of marriage is choosing to love our mate and acting in their best interest in spite of our differences. It's from that perspective that we can witness the true depth of love displayed by our mate. The trouble is not actually in the struggle alone, but in the heart's attitude toward the struggle.

We all struggle. We don't all have affairs, but we all find ourselves in situations which are bigger than our own ability to deal with. Finding the right steps and a safe place to heal is paramount. Learn more about our courses for unfaithful spouses and betrayed spouses. If you're looking for a safe place to heal as a couple, you can look at our EMS Weekend or our EMS Online course. All of these programs are filled with expert insight and practical steps any couple can take to find healing and restoration for their individual selves, their marriage, and their family. I hope you'll consider taking action today to find new life and new hope.

If you're the betrayed spouse, I want to invite you to our previous Hope Rising conferences now available On Demand. We have an annual one-day conference in Austin, TX where speakers will speak into your specific situation of infidelity and help guide you through the recovery process. It's not as hopeless as you think.

This gives a message of hope

This comes at a good time during my recovery. The message, "Be kind to yourself, and be kind to your spouse," resonated with me as the wandering spouse in our marriage. It's like kindness will be the glue that will help keep the couple stick together in the long run.

Communication Killers: How to Remedy Stonewalling
What It Takes To Survive an Affair: 3 Must Have Components
The Anorexic Marriage: A Void of Intimacy
How to Not Make Things Worse: Community Poll
The Proper Use of Boundaries - Creating Space for Healing and Change