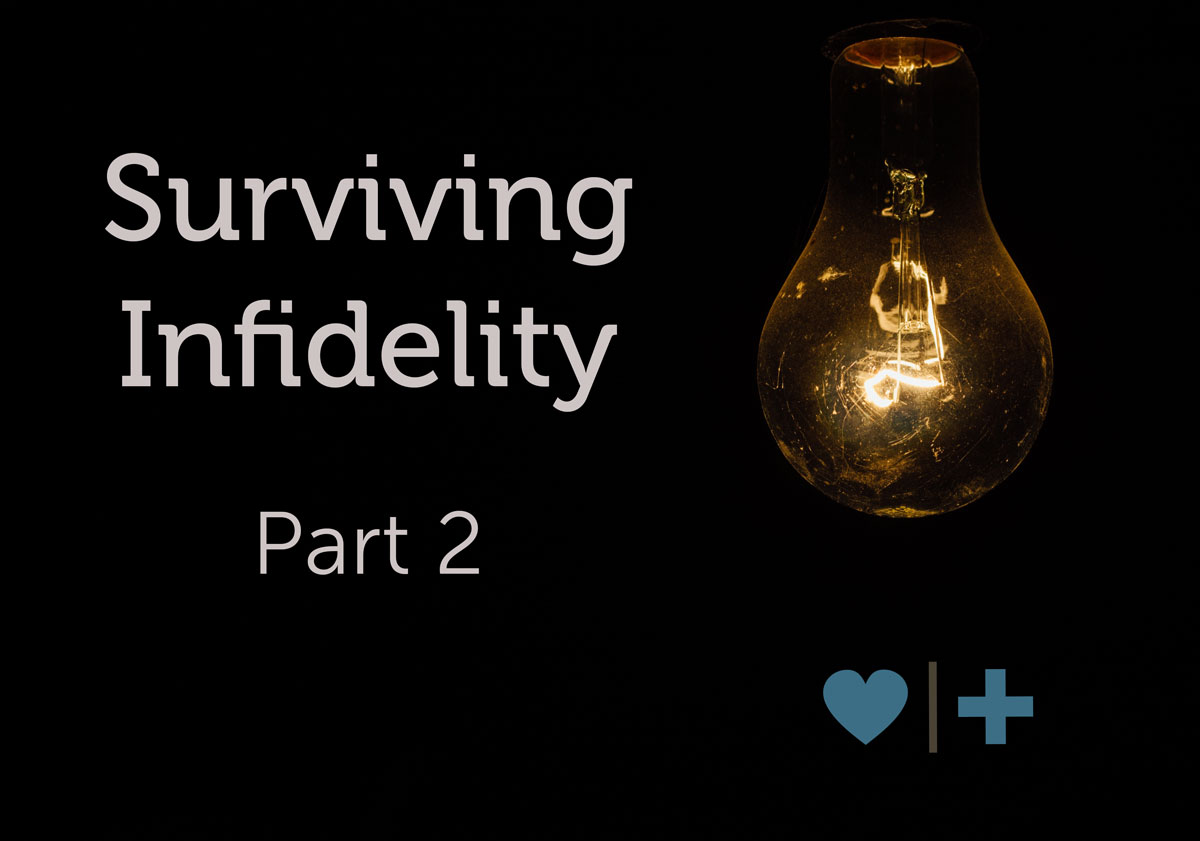 This week we’re exploring the most common mistakes made by the unfaithful spouse after the discovery or disclosure of infidelity. As mentioned in last week’s article, (Surviving Infidelity Survey Part 1: What Do You Need to Know?) we surveyed hundreds of our readers to discover what would have made the recovery process easier in the beginning. I’m not saying recovery is ever going to be “easy,” but every person who has traveled this road can tell you about mistakes that only made recovery more difficult. This week, we’ll uncover what actions the unfaithful members of our community identified as unproductive or even harmful.

The question, “What was the least productive thing you did after the infidelity came to light?” was structured with six categories we provided followed by an opportunity for participants to make other suggestions. The provided categories were as follows:

Survey participants also had the opportunity to identify other courses of action that proved to be unproductive. Three of these stood out:

Why were these courses of action unproductive? Let’s see if we can discover some of the reasons.

27% Withheld Information Too Long From Spouse

If there is one thing that delays healing after infidelity it is stringing out the discovery process. It’s tempting to try to control your mate’s reaction by controlling the information, but to reestablish trust the unfaithful spouse has to first trust their mate with the information. The longer the details of the affair are dribbled out, the more difficult it becomes to move beyond the discovery stage to the tasks of grieving and forgiving.

If you are currently in the discovery stage with your mate, take a lesson from those who’ve gone before. Let go of the information so that you can use the time productively and make progress in your recovery.

One-fourth of our respondents identified maintaining contact with the affair partner as the least productive action taken during recovery. This may seem obvious to the betrayed spouse, but an affair often affects the brain of an unfaithful spouse like an addiction. They are not likely to be rational when breaking off an affair, just like you wouldn’t expect an addict to be rational while trying to achieve sobriety. I would suspect a higher percentage of unfaithful women maintain contact with their affair partner than do men. Men are able to compartmentalize their actions, so a man may very well be entangled in an affair and still want to save the marriage. For women, everything relates to everything else, so if a woman is in an entangled extra-marital relationship, she has likely checked out of the marriage completely.

For those who can’t seem to escape the ties of your affair partner, or for those who simply aren’t sure you want to, I suggest reading our “Ending an Affair” series, and our "31 Reasons to Stop an Affair" series. It may also be helpful to learn about limerence and the difference between limerence and love. If you are in an entangled relationship, believe me when I say that you can’t fully disengage from your affair partner on your own. You will need help from others who have been there and can guide you with truth and without judgment.

19% Wanted My Spouse to Just Get Over it

As mentioned before, being able to process what occurred during the affair is one of the key success factors to healing after the affair. A possible explanation for the men who wanted their mate to “just get over it” might be a lack of empathy. They fail to see how they wounded their mate. Empathy is crucial in surviving infidelity, but it cannot be learned in a vacuum. Think of empathy as a skill that must be modeled and learned, not as a switch that is simply either on or off.

We found it interesting that the women in our survey tended to be less defensive. This may be due to the fact that women take more personal responsibility as the unfaithful spouse for the decision to have the affair. When men have affairs they’ve typically given little thought to their motives beyond the fact that they won’t get caught. This might explain why they tend to be more likely to be defensive about what they’ve done. Defensiveness usually comes from shame or guilt and is typically an attempt to justify (read: pass the blame for) their actions.

7% Believed or Acted on Bad Advice

Sad to say, everybody has an opinion on what they would do in your situation, yet people actually walking through recovery seem to always report surprise at how they responded when the infidelity came to light. In our culture, we typically believe infidelity must automatically equal divorce, but other factors come into play and influence our decisions. This makes is difficult to find people to talk to because they have no experience with the tumultuous emotions you’ll experience every day. For the unfaithful spouse, it can be difficult and confusing trying to learn to support your mate’s recovery because neither of you has experienced this type of trauma before. Hopefully, the people you listen to are those who have successfully navigated the recovery process.

6% Refused to Get Outside Help

We had far more women claim not getting outside help as their least productive action than men. Personally, I believe infidelity tends to be more shameful for women than for men. This shame might account for why these women were less likely to get outside help. It might also be the fact that the men were more likely to want to salvage their marriage and therefore had more motivation to get help from the beginning. Regardless, not getting help didn’t help these women.

3 Other Unproductive Actions of the Unfaithful:

For those who feel they lost their desire for their mate before their affair, re-engaging in the marriage is difficult. Frequently, there is ambivalence as to whether to continue in the marriage after the affair. Some feel no hope for change in what they considered a miserable marriage. Others doubt whether or not their marriage can be restored; they fear their mate could never forgive them or wonder if they could ever rekindle feelings for their mate.

People who have low desire for the marriage may avoid re-engaging to avoid giving false hope. It’s interesting however that this approach was identified as one of the least productive actions for unfaithful spouses. Without taking the risk of re-engaging, it’s impossible to determine the possibilities for healing and for a meaningful life together. Re-engaging is essential to surviving infidelity.

Focused on Trying to be Perfect Rather than Authentic.

People often have affairs because of intimacy avoidance. They are too focused on trying to please their mate rather than being honest with their mate. If an individual’s goal in recovery is to save the marriage, then authenticity is not pragmatic. You will tell your mate only what you think he or she wants to hear in order to motivate them to continue in the relationship. However, this leads to a performance-based relationship and, as always, we discover that it’s never really enough. The ensuing dissatisfaction can lead to more temptation to have an affair. It also fails to resolve the issues that were present in the relationship prior to the infidelity.

Intimacy in marriage almost always creates short-term instability. When we are authentic with one another, it highlights our differences. The most severe consequence of trying to be perfect rather than authentic is how it robs us of love and true intimacy. I can never be loved unconditionally as long as I only conditionally let my mate know who I am. What convinced me of my wife’s love wasn’t the fact that I was perfect, but it was the fact that she chose to love me in spite of my imperfection. Authenticity is crucial to surviving infidelity.

Made it About Me and My Guilt and Shame Rather Than My Mate's Recovery.

I found this comment to be particularly interesting. It’s certainly easy to make recovery about our failure with little or no consideration as to how our actions affected another. While it has the appearance of humility, focusing on our shame is still 100% self-centered. Love is concerned about others, not about what others think about us.

If you’re in the in midst of surviving infidelity, I hope you’ll learn from those who’ve gone before. It’s not time that will heal you, but it’s how you use that time. Are you making decisions that bring new life and health, or are you still stuck in a spiral of destruction? I hope you’ll choose life. If you’re unfaithful and want to avoid making these mistakes, join a Hope for Healing class. There you’ll learn how you got here, practical steps to take for surviving infidelity, and how to stay safe in the future.

Does it ever go away?

I’ve been dealing with knowing about the affair for 8 months now, My partner has participated in trying to make amends but something still seems amiss. Everything we’ve done has been initiated by me. Every conversation, every touch, every request. It makes me feel like he’s hiding something and that he really doesn’t want things to change. I don’t know if I’m fooling myself into believing we can make it through this together and holding on to a fantasy or if I’m desperate for a “movie moment” where I know without a doubt I am loved. This feeling of inadequacy, of doubt, how can it really ever go away?