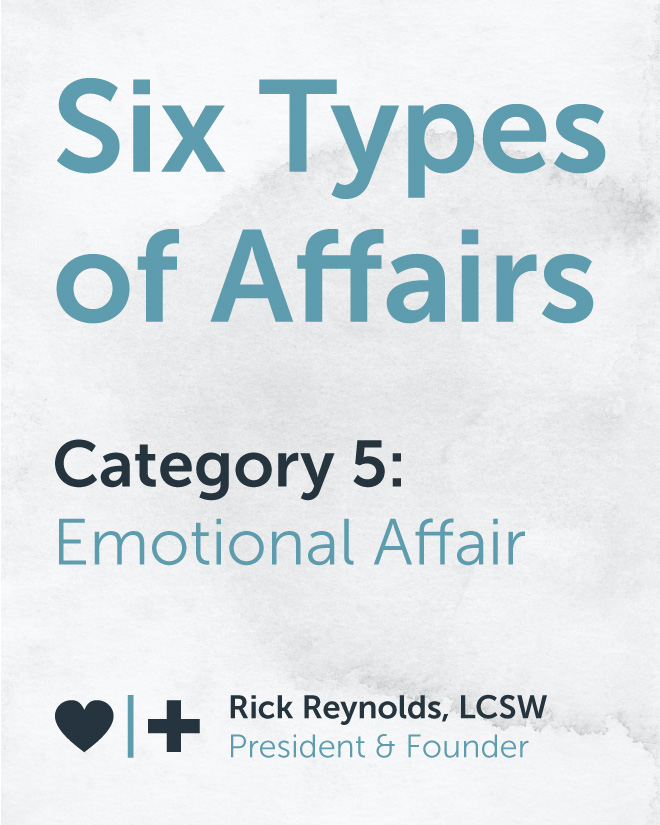 The emotional affair is about a "special friendship." Frequently, the two who are "just friends" share something in common such as work or exercise. The affair partner provides emotional support and validation for the unfaithful spouse. As Shirley Glass says, the emotional affair partner serves as vanity mirror for wayward spouses while their mate is a magnifying mirror that reveals all of their flaws.1

The unfaithful spouse will claim they are just friends, but as Shirley Glass says, anytime you have to put the word "just" in front of the word "friend," there's a problem.2 A lack of sexual involvement with the affair partner may allow the unfaithful spouse to morally justify the relationship, but technicalities in no way absolve the betrayal perpetrated against their mate.

Frequently, the unfaithful spouse will accuse the betrayed spouse of being jealous if they raise any concerns about the relationship in an effort to turn the heat from the illicit relationship to the character of the spouse. The absence of sexual involvement doesn't change the level of devastation experienced by the betrayed spouse. In fact, many spouses who have been betrayed by an emotional affair state that it would have been easier to accept an affair that was just about sex.

The notion that a lack of sexual involvement somehow prevents this type of relational intimacy from being an affair is baffling. Anytime someone other than our mate is permitted to enter the most intimate areas of our life, we are giving away something that we have no right to give.

At Affair Recovery, we agree with the late Frank Pittman who defined infidelity as "the keeping of secrets." If the unfaithful spouse tries to hide their interactions with the other person, it's most likely an affair. If the unfaithful spouse seems to be closer to the other person than to his or her mate then, in my opinion, the affair has already begun. Peggy Vaughn says, "Emotional affairs are physical affairs that have yet to get physical".3

Characteristics of an Emotional Affair:

This is what we're dealing with. A facebook fantasy with extenuating circumstances. I think it's more painful than a traditional affair.

I'm so sorry for your situation. Mine is the same with my husband. Has your wife stopped seeing her AP? How are you trying to trust her again? I could use some pointers. Thank you.

I have same issue

This my issue too, I just discovered hers a week ago. You get answer on it all let me know

I think I was involved in 3 types namely Fallen in love..Emotional.and I am at the stage of Wanting the marriage and the Affair. What started out as a friendship ended up as an affair where I believe I fell in love. My spouse found out that the friendship had turned into an affair and forgave me but I still want both. I feel terrible because I caused my spouse so much pain and he even is willing for us to try again but at the same time I feel like I can't let go of the AP. What makes my situation different is also that the AP is of the same gender and am at a point where I am confused about my sexuality. I have always considered myself straight but I fell in love with someone of my same sex and the love we have for each other feels so real and unbelievable. Am stuck please help

torn between staying or leaving. An emotional affair that became physical with kissing, and hugging, no sex per him. How do I know that?
Im so heart broken. He was the love of my life. Never ever would've believed he'd cheat. He wasn't that person. Happened in
2018 and Im still crying and is disbelief. Does it ever get better?

Same for me… they claim it was just hugging and kissing. It happened in 2019 when he was in another country… but I still feel totally lost and confused. I just feel like he is hiding something. There is no trust… I don’t know if there is any point continuing

What type of affair was it really?

How do you actually know what type of affair it really was. My wife has been vague but only admitted to kissing and touching. She’s been vague with me at best when asked. It’s difficult to get by this without knowing the truth.

What type of affair is it

It's been six months for me and I still don't know all the details about what happened. Apparently he had been friends with her on Facebook for years.
They had been talking and texting her for at least two years by phone well that's as far back as I can see on my phone records. And one morning I came home opened up his phone and there was the chatting on messenger at 4 in the morning the conversation was innocent but he did call her babe and sent her a I love you gif. He has lied so much about the whole thing and tried to protect her made her look friendly. By the way she is also married. I caught her leaving my house six months prior to that. Just so many different things happening at the time and our marriage was in a bad place I felt like I didn't even belong in my home I really just felt unwanted by him at times it was so bad at the end I told him it would be easier to leave him if he would just cheat and he was i just didn't know it. But I still haven't left he has done everything to try and make things right but 2 months after finding everything out I drove up to a church parking lot and there they were talking outside of his vehicle him parked behind her. What craziness i finally got tired and took his phone and called her up and all she could say over and over again was that they were good friends from the past apparently she lived down the street from his grandparents house and they had a deep connection and had become close friends. That very same day he had a text message from her that said ok no problem. She told me she was responding to a message he had sent to her two months prior. Two days later he gets two cards in the mail from her saying merry Christmas and one memory anniversary on our dogs passing really you had to take our dog too after that I new she was vindictive and pissed off. So now iam left to wonder what really happened was it much more than they say. Sometimes I think it was . But if any body has any feed back I would appreciate it.

These things can slip up on people. I developed a deep friendship with a coworker. She was intelligent and beautiful, plus
we had a lot in common. We even spent some time after work. Looking back, it had become an emotional affair. My wife was working late every night and I left early in the morning for work. We had little or no time together, and on Sundays she caught up on her rest. Only when my coworker left did I realize we had had an emotional affair. There was sexual attraction that we never acted on. My wife and I made some changes, and we reconnected. Today things have never been better. Hopefully you can work out things with your husband, but only if he stops contact with his friend.

After 6 months of having an

After 6 months of having an EA with a co-worker, I told my husband to leave. That just made it easy for the affair to turn sexual. I blame myself for it becoming sexual since I forced him to move out. He broke it off and came home and our marriage is better than ever. My husband has told me many times that it was not my fault. I also blame the AP since she pursued him and initiated everything. He has encouraged me to blame him equally if not more than.
I continue to have a lot of self blame.

I caught my husband 2 weeks

I caught my husband 2 weeks before he was planning to meet with his affair partner in South Africa for work. He stopped all contact and still had to go to South Africa for almost 2 weeks while I was at home reeling from this newfound information needing to look after our kids. I’m struggling to forgive him as this affair was going on for a little more than a year and if I didn’t catch him it would’ve become sexual. What does this mean for our marriage? He says he’s sorry and he’s trying to be more open but I don’t believe anything he says anymore.

My husband had an emotional

My husband had an emotional affair, but deny's it. Happened over 2 years ago. He lied to me about so many things. But his stories about where he was were outrageous childish lies. Anyway bottom line is many things happened, Texting is the only way to communicate this subject with him. He just simply will not answer any of my questions and has blamed me through this whole thing. Over and over. I just want him to be honest and tell me why.

My husband has had numerous emotional affairs our entire marriage. He hides the entire “friendship”, reaches out to ex girlfriends and will have a few EA’s going at once. He’s done this in all of his past relationships too. It’s so confusing, like an addiction. They have never once become sexual, he said it he loves the attention and constant validation. One AP was pushing to make it sexual and he said if not for d-day happening when it did he thinks he would have let it only to keep her as an AP because he loved how she acted like he was amazing. I have always been incredibly positive to him and he agrees with this, never wanted to leave me and never was limerant. It is so confusing - like sex and love addiction without the sex or love. After years of recovery and polygraphs and working at it I do believe him but I still just don’t understand it.