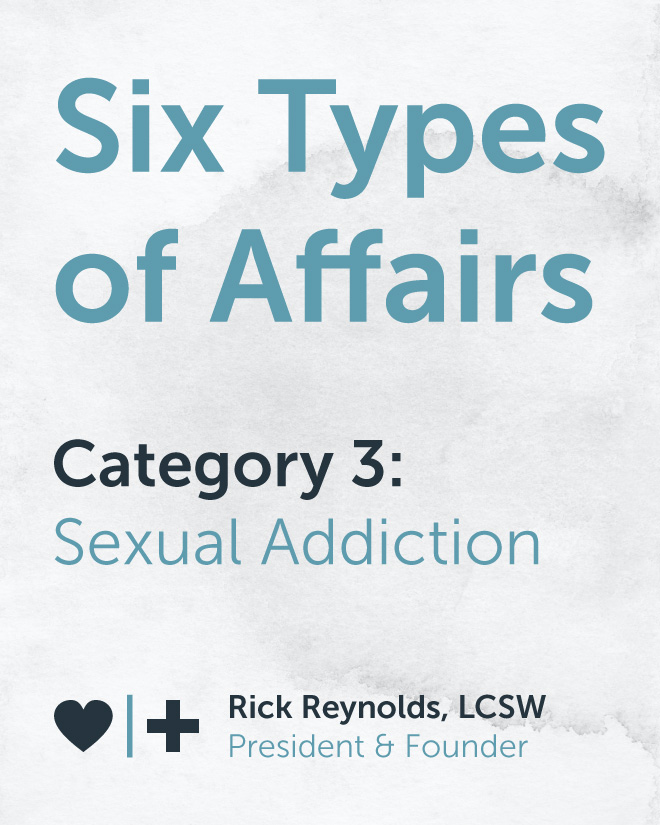 This type of betrayal is an ongoing pattern of sexual behavior such as frequenting strip clubs, viewing pornography, compulsive masturbation, prostitution, repetitive encounters with sexual partners, and other behaviors that are destructive to both the individual and to the marital relationship. These individuals, though married, have never been able to find complete fulfillment from their marriage. They are enslaved by a drive to satisfy their longings. Driven by obsessive thoughts and compulsive behaviors, they are powerless over their extra-marital attachments to behaviors, people, or objects (such as pornography). These individuals look to these extramarital attachments rather than to their mate to meet their need for love and acceptance.

Interestingly, this category of affairs is not about the marriage and, often, the betrayer will state that they don't want to lose their marriage. Most likely, they would have pursued the same behaviors regardless of whom they married. The fear and shame associated with this behavior perpetuates the dual life of an addict which, in turn, propels the destructive behaviors. They often feel hopelessly trapped by these behaviors but are afraid to come clean because they don't want to lose their marriage or give up their addictive behavior.

This type of betrayal is especially difficult for the betrayed spouse because their suffering is not just from the betrayal but also from their inability to understand their mate's behavior. What the addict has done seems so foreign that the betrayed spouse cannot comprehend it. Or they may be in shock when they discover the sheer magnitude of the compulsive behavior (like a man who has visited prostitutes).

How can one recover from this?

How do we get a proper diagnosis of whether or not an addiction exists which lead to affairs?