Our mission at Affair Recovery is to help those impacted by infidelity find extraordinary lives of meaning and purpose. For us, the end goal isn't just to recover from betrayal but to use betrayal as a catalyst for transformation and change. To that end, I hope to provide a bit of a road map as to how transformation can actually occur.

I want to acknowledge upfront that many of these concepts of transition are taken from William Bridges' book, "Transitions: Making Sense of Life's Changes." 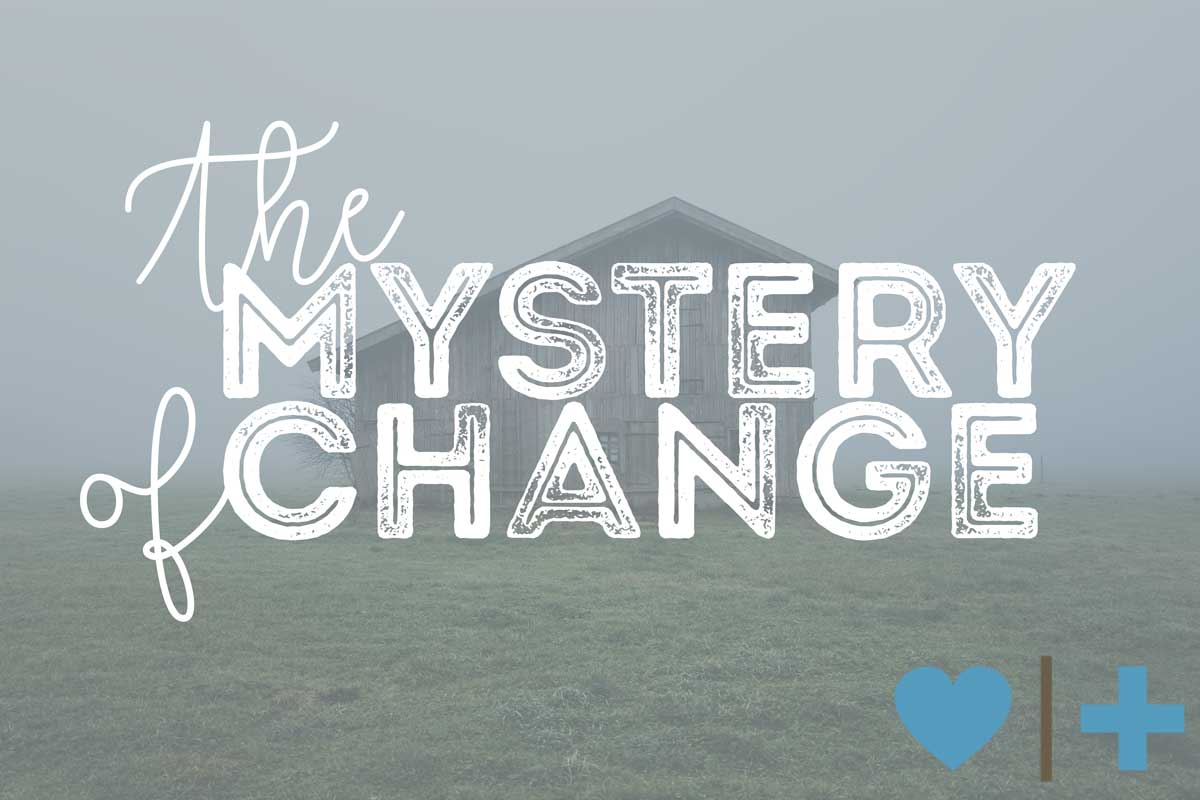 I'm sure most of you have heard the riddle: What animal walks on four feet in the morning, two feet at noon, and three feet in the evening, yet has only one voice? —The human being. But perhaps, like me, you never saw the implications of the answer.

Life is full of transitions. The image of three legs for example, represents more than physical limitations that come with old age; it also represents a cluster of changes that includes suffering, deepened insight, and disengagement from an outlived way of doing and being.

Betrayal forces change. This is a problem because few of us know what to do with the change, especially when that change is facilitated by one of the most gut-wrenching, life-altering events known to life and marriage. Most of us hope that change will somehow pass us by and let us proceed with our familiar life, but none are that fortunate.

Infidelity isn't the only change agent that rocks our lives, though it may be one of the most significant. As humans we also have to deal with illness, job loss, death, moving, aging, and life's stages. While all of the above create losses to be dealt with, they may or may not result in self-renewal or relational growth. Whether we like it or not, change is an inescapable part of life, and it behooves us to learn how to use it productively, even in the case of marital betrayal or addiction.

Transforming loss, created by change, is the process of transition.

Sadly, most of us are woefully uninformed when it comes to the process of productively navigating transition. According to Bridges, transitions have three components:

It's An Internal Matter

In the Christian tradition, for example, that same process is called death, burial, and resurrection (born again or rebirth). It is the process where we let go. We may need to let go of ways we once believed or assumed, or perhaps the opinions of ourselves or others. It could be letting go of some outlook on the world or attitude toward others. While change or loss may precipitate transition and transformation, transition is not about external change. It's an internal matter, which transforms our understanding of ourselves and life itself. It's a normal process we all face at various life stages; it is also an opportunity for growth when life is interrupted. It's the process where we move from disorientation to reorientation, and for many of us, it has taken infidelity to instigate that process.

It sounds impossible, but my own marriage and countless others, are living proof that infidelity can be used in a way that completely transforms your marriage and life in an incredible way.

Transition and change are NOT synonymous.

"One of the most important differences between a change and a transition is that changes are driven to reach a goal, but transitions start with letting go of what no longer fits or is adequate to the life stage you are in"1

Initially, the overwhelming changes created by infidelity render most people incapable of comprehending the potential transition. We struggle with simply surviving what seems like an impossible situation. Eventually, we're able to begin wrestling with endings and transition. It's grief over time that reconciles us to the losses and allows us to get our mind around what has happened so that we can survive.

How Do You Manage the Grief?

Most people can't begin the process of transition until they've at least partially moved though the stages of shock, anger and depression.2

In the case of infidelity, this stage can be explosive, overwhelming, and exasperating. It's not until someone enters the dialogue and bargaining stage that the process of transition can slowly begin and new alternatives can be considered. Keep in mind, the path through grief isn't necessarily linear; people may move back and forth between different stages.

Infidelity creates a number of losses and, therefore, endings. For many, it's the end of the marriage as they once saw it. It can even be the end of the how they view themselves.

Endings are similar to dying in that it is the recognition and acceptance of these endings that begins the process of transition. It is accepting what is gone and letting go of our old ways of understanding. It may be letting go of part of what we once believed to be true about life or self or our spouse. It's a willingness to let go of our dreams of life as we once saw it and understanding that those dreams are gone. It's only when our lesser dreams shatter that we feel free to believe and live for greater dreams.

The Neutral Zone: No More... But Not Yet

The second stage of transition is the neutral zone. It's that place of "no more" and "not yet". Recently, I spoke to a woman in the neutral zone. Her husband has been in and out of an affair for the past three years. With his last relapse, she finally gave up control of her marriage of 27 years. She had been considering the endings for months, and she realized that her old ways of looking at this no longer served a purpose. For her, it was time to let go. Her tears had been shed, and she had gracefully reached the place of acceptance. She wasn't sure whether or not her marriage would survive. For her, that was no longer the point. In the process of transition, she had let go and she no longer needed what was once important.

However, as we spoke recently, she described herself as being void of emotion, like she was empty. She wasn't depressed or discouraged, she just wasn't sure what was next. That's a great description of what happens in the neutral zone. It is a place of regrouping and rest.

All too often we want to rush the process of the neutral zone. We're uncomfortable with the feeling of emptiness. People think it strange when we just want to be alone to walk and think, especially when it's difficult to verbalize the process or what you've been thinking about. It's just accepting where you're at and being okay with that. It's a time of waiting for what's to come and being okay with not knowing, but knowing that in time it will all come together. It's a place of being quiet and still, waiting for what comes next.

This leads to the final stage of a new beginning. In the process of transition, we don't come to the beginning until we have reached the end. Not until old ways of thinking and coping are abandoned can new possibilities come into awareness. Once we release our dreams of how life ought to be, we're free to take stock of what we've got, and we're able to create new ways and new life.

Often, the first hint of what is to come next appears as a subtle idea, impression, or image. From there, new passion and desire begin to grow as we follow new dreams and visions.

Life's transitions are a requirement if we are to grow and let go of old, even childish ways.

While we may not be too keen on the circumstances requiring the transition, we all have to choose how we're going to respond and adapt to life's tragedies. Do we remain forever marred by the betrayal or possibly our own bad choices, or do we use those circumstances to take us to a higher plane?

It is our choice. It's not about right circumstances; it's about taking the right steps.

Few things are more difficult to face than betrayal, but at the same time, we get to choose how we respond.

***Disclaimer: Let me stress this may not be applicable for those in the early stages of recovery. As long as the change created by the infidelity seems incomprehensible there is little hope of transition or transformation. You're still in the early stages of grieving and may not have yet arrived in a place of acceptance where you can begin exploring the endings. And that may be exactly where you need to be. Grieving takes time, and the amount of time depends on the person and their unique situation.

No matter what stage you are in, I encourage you to find community. If you don't know where to look for a community of others who are walking the same path, I invite you to join us at Affair Recovery. If you need help navigating the changes you didn't ask for Harboring Hope is a perfect place to start.

Hope for Healing registration opens monthly. Subscribe to be notified.
This online course for unfaithful spouses fills up quickly, so don't wait! Discover how a supportive non-judgmental environment paired with expert content can provide life-changing hope, clarity, and healing.

I’m at 20 months and I’m just getting to this stage. I envy those that process quickly. I simply don’t.

My experience of neutral zone

I love this video. It's so helpful and necessary for us to know about these stages. I think I'm at the neutral zone stage. When I experience the neutral zone stage for the first time, it feels uncomfortable. I feel confused, empty, and tired. I spent so much time reading and journaling. My therapist told me that my feeling is normal. I'm getting through it day by day without knowing where am I going, yet know that I don't want to have what we had before either because it's pointless. He is still ambivalent to change, but it almost feels like has nothing to do with me. At the same time, I started looking into other possibilities. Talking to friends helped. I only have 4 selected girlfriends I had the conversation with, and shockingly, 3 of them have gone through infidelity, one of them has gone through five years of physical abuse. If I didn't open myself up towards them ask for help, I wouldn't know. It kind of made me feel less isolated. I also watched a lot of videos from Oprah and Iyanla Vanzant. Started looking into what kind of small choices I made led me to this marriage and subconsciously allowed the infidelity happened. I still not 100% sure where am I going, but I feel I'm having a bit of more clarity each day. I'm in the neutral zone for about a month and a half now. 7 months in from D-day. I'm taking my time. And I find that the less resistance I have towards my feeling (the more I allow myself to take time), the faster I'm getting progress.

To all betrayed friends, lives are ours, let's not hand over the control of our lives to the unfaithful spouse.

The Paralysis of Ambivalence: Part 2
Communication Killers: How to Remedy Stonewalling
Social Shame Survey Results: What We Learned from Ashley Madison
Why Couples Fail After an Affair: Part 1 - Not Knowing What Happened
How to Not Make Things Worse: Community Poll